I was running some tests recently to see what additional information can be obtained about Googlebot, with regards how it fetches and renders content on a webpage. Personally I’m invested in this area as many clients I work with are making use of Javascript to render content, and it was an area I wanted to look at further to help my own understanding of the fetch, render and indexing process. With Javascript Google is improving it’s ability to understand several key Javascript frameworks, which in turn should give websites using that technology a better organic search performance. But Google (and particularly John Mueller) have been keen to stress that they’re still a long way off being perfect, and they recommend that SEO’s and web developers take time to understand the issues that Javascript can cause on a website.

Lots has been written about this particular area recently by many far more proficient SEO’s than myself – Bartosz and his team at Elephate have made great progress at establishing themselves as real Javascript SEO specialists, whilst Barry Adams at the State of Digital put together a great resource about Javascript SEO a few weeks ago too. I wanted to run some of my own tests to see what else I could discover, if anything, about Googlebot (and when referring to Googlebot I’m actually talking about Google’s Web Rendering Service (WRS), and less about Google Caffeine, the bot responsible for indexing content, although it’s obviously important to know their relationship).

I thought it’d be interesting to know what, if anything, can be gained by analysing Google Analytics data when combined with fetch and renders within Search Console – are we able to track Googlebot?…

What we already know about Googlebot

So far in 2018 various pieces of information have been gathered to paint a particular picture of Googlebot. I’ve included the key points below, which by now I think are pretty much agreed in the world of SEO:

As recommended by Google here,  if you have problems understanding how they’re rendering your content you should first use Fetch & Render within Search Console itself, followed by logging any errors from the Javascript execution. Note that fetch and render is just a theoretical output as to how the page should appear for Google, and although viewing the site’s cached content in Google is another option, it won’t help much as the cache uses your own browser to output any code encountered.

I wanted to see what happened when I tried accessing my real-time Google Analytics report during a Fetch and Render request within Google Search Console on a website I’d only just created, which had Google Tag Manager/Analytics script added. I’d assumed that nothing would’ve happened – that no sessions would’ve been created within Analytics because it wasn’t a “real” visit (I realise many spam bots exist, and scripts which spoof UA script sessions, but I figured Google would’ve been different). To my surprise they were tracked – each fetch and render created 2 sessions. Here’s what I found out:

Screen recording of the fetch and render / Real-time Analytics report

There’s nothing new or insightful with the above findings, it just matches up with what others have said previously (such as JR Oakes’ great piece on hacking the Search Console log)

Confirming the version of Chrome used by Googlebot (note that “Googlebot” text above is a custom segment I created in Google Analytics).

Other things to note are again the Google Chrome browser version for desktop (41.0.2272.118) whilst for the Mobile crawler it’s a Google Nexus 5X. So using Google dev tools as a Nexus 5x, from Chrome 41 browser should be a good way to emulate how Googlebot for mobile really sees your website’s mobile version. 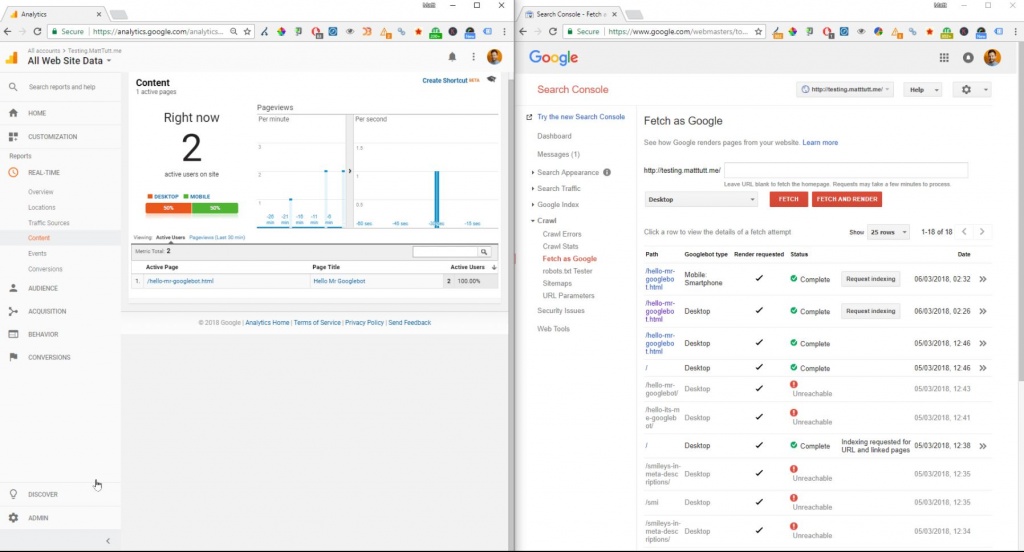 I realise all the above is relatively easily available within a site’s server logs, but to me it’s interesting to see that this information was also very easily accessible within Google Analytics. It also confirmed the version of Chrome browser used to access sites, as well as the mobile version used by Googlebot. Many SEO’s are keen to know if/when Google will start using a more modern version of Chrome to render their websites, and this could be one way to test this out as we move closer towards the mobile-first index (useful to those who can’t access server logs either) – but that depends on whether the fetch and render feature will match that as used by Google’s real WRS.

Would you like to hire me to help you grow the number of visitors to your website? I can help through carrying out SEO services, bringing you more organic traffic to your website by increasing your position in the search engines or I can improve the ROI of your Google Ads. Just send me a message to get started!
[email protected]

This website uses cookies to improve your experience while you navigate through the website. Out of these, the cookies that are categorized as necessary are stored on your browser as they are essential for the working of basic functionalities of the website. We also use third-party cookies that help us analyze and understand how you use this website. These cookies will be stored in your browser only with your consent. You also have the option to opt-out of these cookies. But opting out of some of these cookies may affect your browsing experience.
Necessary Always Enabled
Necessary cookies are absolutely essential for the website to function properly. This category only includes cookies that ensures basic functionalities and security features of the website. These cookies do not store any personal information.
Non-necessary
Any cookies that may not be particularly necessary for the website to function and is used specifically to collect user personal data via analytics, ads, other embedded contents are termed as non-necessary cookies. It is mandatory to procure user consent prior to running these cookies on your website.
SAVE & ACCEPT