Seeing an issue at the moment that appears specific to sites that are hosted using Siteground. Would be happy to be proven wrong, if it’s not specific to them, but from all my tests it looks that way.

The issue I’m seeing is that Googlebot is unable to fetch the current robots.txt file of the site, and so are either not crawling the site, or are falling back to a previous version of the robots.txt file.

I noticed this yesterday on a client site I was building for them. The dev site I’d built was noindexed, I took those noindex tags off all pages, then went to use the URL inspection tool in search console and Google wasn’t able to access the page.

At first I was convinced this was an issue with Google’s tool. I also checked using the Rich Results tool, and the Mobile Friendly Tester, and each of these failed too.

I could crawl the site using Screaming Frog – no issues there either.

I then tested using Bing Webmaster Tools’ Inspect URL feature, and Bing did get a 200 status code for that page, so I knew this issue was specific to Googlebot.

From some Twitter chat I noticed someone I followed mentioning an issue with their Sitemap, and that Google couldn’t access it. They’re also using Siteground (I asked them as it was a hunch I had).

I then put some of my sites through Google’s legacy robots.txt tester tool, and eventually found the error message below.

I don’t know if this is specific to a certain setup of sites on Siteground (maybe plugin/cache/location specific?) but I do notice very similar chatter on the Google webmaster forums – people having similar issues.

Nice to find out I haven’t gone completely mad – they’ve announced that there have been issues with Googlebot and they’re working to resolve them. Screenshot below is from the SiteGround twitter handle, and here’s a link to my Twitter thread too.

Hopefully they’ll resolve fairly soon – personally I spent a bit too long trying to figure out what could be wrong, on my client’s site. Hate to imagine how much time everyone else has wasted chasing their tails!

So another 24 has passed since SiteGround were alerted to this issue (I think it’s actually even longer than this – I first noticed the problem on the 8th of November) and still the issues persist.

Since posting this on Twitter on Tuesday I’ve seen many people tweeting to share their own issues. One unexpected (but in hindsight, obvious) additional impact has been on people on the PPC side of things, trying to run Google product ads / Merchant Centre ads. Googlebot also crawls these heavily to check the product listings, and so if SiteGround isn’t available to Google (for whatever reasons) then they will fail to reach those products and so the ads will fail/not run. This can get quite expensive for any clients, especially this time of year!

From a few of the support threads I’ve seen shared, and from SiteGround’s own updates, I get the feeling that:

So it doesn’t spark a lot of confidence when this is all going on and is being shared publicly. A few people on Twitter have announced they’ll be looking to shift hosts – and I can’t blame them! 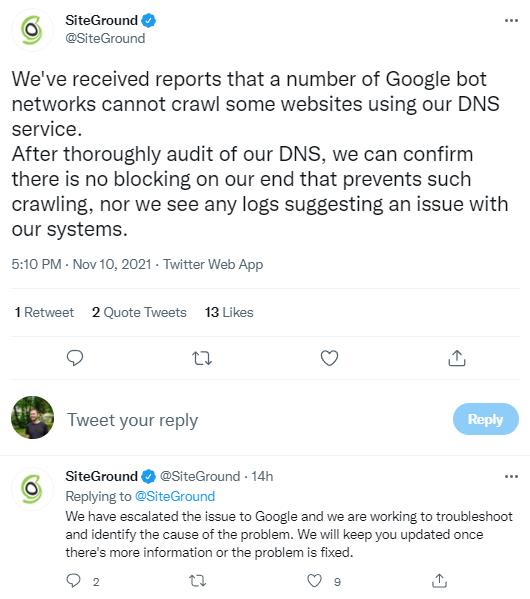 One positive from this has been seeing others sharing their own updates and helping to spread the issue – in a bid to try and rally SiteGround to sort it out. Twitter user Kim was helpful by sharing this update – where SiteGround claim to use Google Cloud. 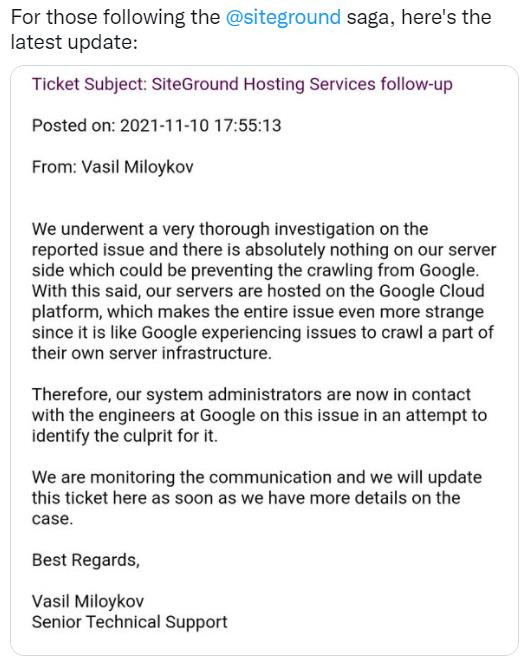 This update kindly came via Kim on Twitter, another person who has been hit by this issue: https://twitter.com/ichangedmyname/status/1458594577292709889

I took this nice set of screenshots to highlight the issue, using this exact article. As a side-note I did nothing here to “submit” the article to Bing via their Webmaster Tools (not even sure if I’ve submitted my XML sitemap with them) but regardless, they found/indexed it fairly swiftly. 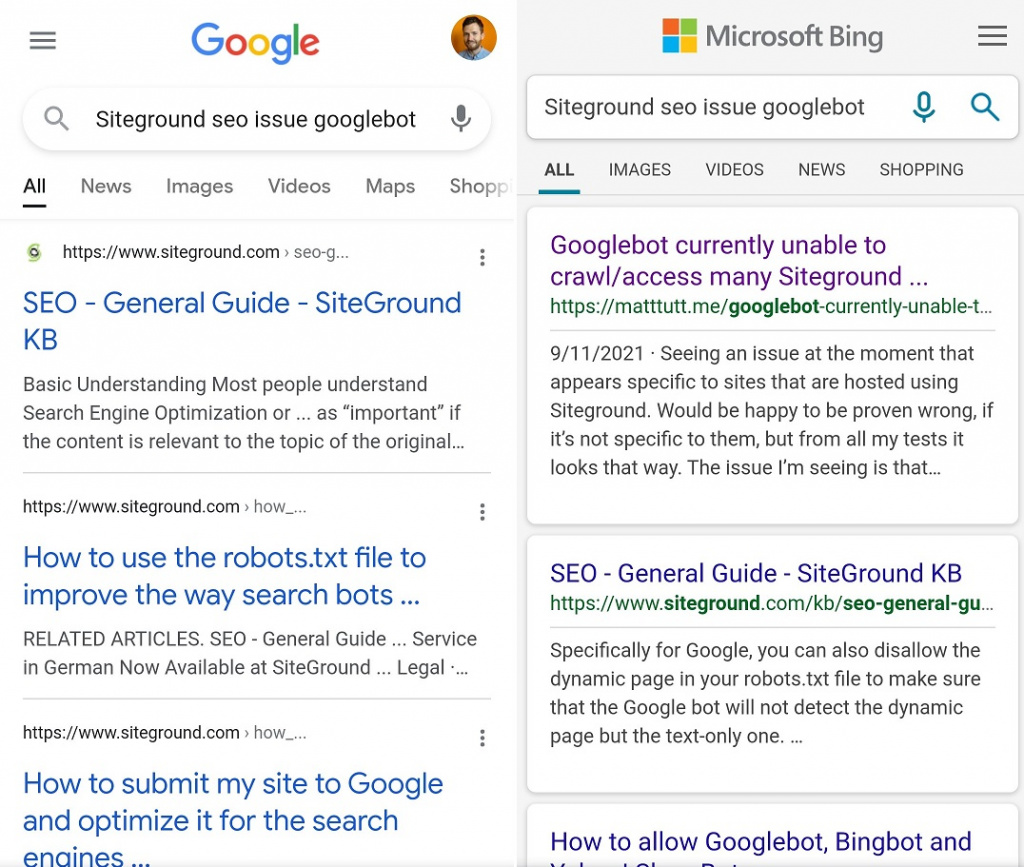 Finally – these updates from Danny Sullivan of Google and Hristo of SiteGround don’t exactly fill me with confidence either: 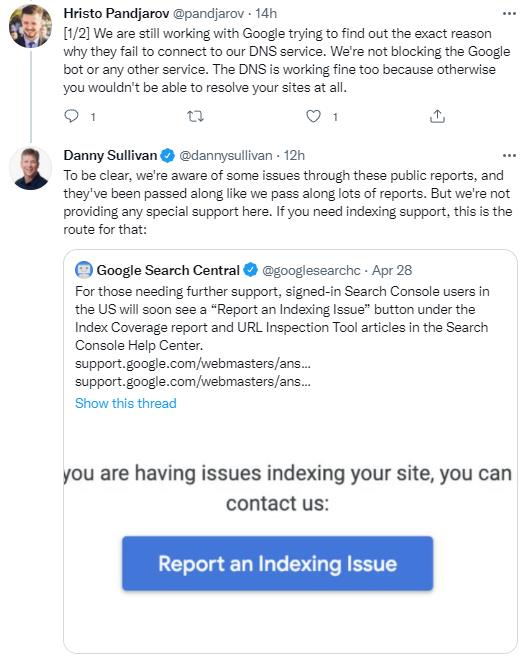 An update from Google’s Danny Sullivan, responding to Hristo (an employee of SiteGround) about the issue – https://twitter.com/dannysullivan/status/1458489019864543235

So – when will this be resolved? Sadly it doesn’t appear to be anytime soon.

As comical as this may seem: the SIteGround issue is still persisting! ????

By some accounts this actually means sites have been unavailable to Google for 5 days (I’ve seen reports from Twitter that this was first flagged on Monday)!

How to fix the problem yourself (caveats apply)

I hadn’t bothered with this initially as I’d assumed (silly me) that a company like SiteGround wouldn’t have allowed such a big issue to have persisted. I was aware that using Cloudflare might have resolved this – simply as some sites that were already on Cloudflare (but are hosted at SiteGround) weren’t impacted when this issue was first announced.

This was drilled home to me by various people on Twitter sharing how it worked for them – and was a quick and easy solution.

So – last night I setup a free Cloudflare account, and then changed my nameservers (from my domain registrar) to point to these Cloudflare nameservers, and within about 15 minutes the change had propagated!

I tested all was OK by running the Rich Results Test by Google – and I got a proper response to the crawl request. Success!

This morning I just ran URL Inspection tool from Search Console for this same site (this very blog post actually) and I can confirm the URL is available to Google.

This post hadn’t been indexed yet, so I requested indexing too, and that was all accepted without problem – see below.

Summary of the fix using Cloudflare

Why didn’t SiteGround make it clear that this would be a good temporary fix from day one? Well…. no idea! It’s not great that we have to make this workaround to fix their issue. But I know it would’ve solved a lot of issues, and would’ve been better than posting nonsense on Twitter like below….

As a side note – I spent a long time yesterday getting my bits together to leave SiteGround. It wasn’t just a result of this whole issue – I haven’t been a fan for a long time. I’ve also got a €500 renewal fee coming up with them for the next 12 months so this has been a timely reminder to sort myself out.

I’ve heard good things about Cloudways, but again it will depend on what you’re looking for in a host. Personally I want one which isn’t going to be inaccessible to Google for 5 days and counting… but maybe that’s just me ????

Would you like to hire me to help you grow the number of visitors to your website? I can help through carrying out SEO services, bringing you more organic traffic to your website by increasing your position in the search engines or I can improve the ROI of your Google Ads. Just send me a message to get started!
[email protected]

This website uses cookies to improve your experience while you navigate through the website. Out of these, the cookies that are categorized as necessary are stored on your browser as they are essential for the working of basic functionalities of the website. We also use third-party cookies that help us analyze and understand how you use this website. These cookies will be stored in your browser only with your consent. You also have the option to opt-out of these cookies. But opting out of some of these cookies may affect your browsing experience.
Necessary Always Enabled
Necessary cookies are absolutely essential for the website to function properly. This category only includes cookies that ensures basic functionalities and security features of the website. These cookies do not store any personal information.
Non-necessary
Any cookies that may not be particularly necessary for the website to function and is used specifically to collect user personal data via analytics, ads, other embedded contents are termed as non-necessary cookies. It is mandatory to procure user consent prior to running these cookies on your website.
SAVE & ACCEPT